By Kay Castillo, Director of Advocacy, Policy, and Legislation

Legislators took things very slowly this week with few bills on the calendar and hardly any committee meetings. Most work was done behind closed doors on the budget as Speaker of the House Tim Moore announced a proposed budget will be out by May 18th and voted on by the House that week. The Senate will have a proposed budget bill in the weeks following. Once the two budgets are voted on by their respective chambers, a conference committee will be appointed to combine the House, Senate, and Governor’s budget to create one final state budget. It is very likely that we may have a budget in place by July 1st (the end of the state fiscal year). Additionally, the Governor announced that our state budget has a $400 million surplus so legislators will work out where the money will be spent.

Still no word on how Medicaid will be reformed. We continue to work on reform with our partner groups to ensure that providers, consumers, and families are included in the reform plan. We have pushed for Mental Health/Developmental Disabilities/Substance Use Disorder services to remain stable while a broader plan is put into place as we have already gone through reform and are a capitated system (unlike the rest of Medicaid services). Additionally, through Medicaid reform, we have pushed for consistency in the system regarding enrollment, payment, and monitoring for providers across the state.

Update on House Bill 562 Second Amendment Affirmation Act: This bill was amended several weeks ago to include that providers could not ask clients on a written questionnaire/health assessment if firearms are in the home or within access to clients. Further, it includes that a provider could not disclose any verbal information provided by the patient or a family member regarding firearms to officials of any kind or document this information in the patient’s record. If a provider does not comply, a fine will be imposed. Because of your feedback to your legislators, the bill was once again pulled from committee for negotiations to be made. We are hopeful, based on feedback from legislators and other stakeholders, that this section will be removed ENTIRELY from the bill. We will keep you posted as we learn more.

May is National Foster Care Month! We participated in a celebration at the North Carolina General Assembly last week where several organizations were present including SAYSO, Children’s Home Society, Methodist Home for Children, Independent Living Resources, Inc, and more. We provided legislators with information on NC’s foster care system and bills that positively impact the lives of youth in care. 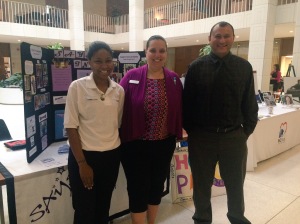 NASW-NC works on behalf of the social work profession on a variety of issues. It is a member benefit provided by NASW-NC to have a registered lobbyist advancing and supporting the profession of social work in North Carolina. The North Carolina Chapter works with National NASW on Federal issues such as reimbursement rates, immigration, student loans, and more. Your membership dues help support our advocacy efforts everyday on the state and federal levels. Thank YOU for being a member and staying engaged in supporting the social work profession.