By Kay Castillo, Director of Advocacy, Policy, and Legislation 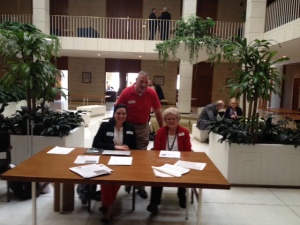 This past week, aging advocates from across the state came to the NC General Assembly to tell legislators that Seniors and Those With Disabilities Matter! Over 100 participants went around and talked with their legislators about maintaining Medicaid eligibility, putting money back into the Home and Community Care Block Grant that was cut in the last budget cycle, increase funding for Adult Protective Services, and more.

Things have been picking up the past two weeks as we move closer to the bill filing deadline. We expect quite a few bills to be filed over the coming weeks. Not a lot of action has been happening surrounding bills that impact our profession at this time. Appropriation committees have been focusing on the outlook in our state and haven’t taken action on bills. In fact, the focus for Health and Human Services has been to look at services impacting those 0-5 years of age. We will keep you posted as bills move. As always, if you have questions or concerns about any bills, feel free to contact us at the NASW-NC office!

Bills with action  this week

SB 114/HB 120 Custodial Parent/Party Cooperate w/ Child Support: This bill requires the Division of Child Development and Early Education and the Division of Social Services to develop a plan requiring a custodial parent or other person with primary custody of a child receiving child care subsidy payments to cooperate with county child support services programs as a condition of receiving child care subsidy payments. The bill passed the Senate and will now head to the House.

HB 119/SB 318 PED Recs/Publicly Funded Substance Abuse Services: This bill requires the N.C. Department of Health and Human Services to submit a 3 year business plan by April 1, 2016, to accommodate the transfer of Alcohol and Drug Abuse Treatment Centers (ADATC) by July 1, 2019. In the first year, the state centers would receive 75% of their projected financing, or $27.5 million, while the MCOs would get the other 25%, or $9.2 million. The groups would split the financing in 2016-17, the MCOs would get the $27.5 million in 2017-18 and then receive all the funding in 2018-19. The House version passed the Health Committee this week and was sent to Appropriations.

HB134 Soliciting Prostitution/Immunity for Minors: This bill provides immunity to any minor suspected of or charged with soliciting as a prostitute. The bill passed the House and was sent to the Senate. The Senate referred the bill to Rules Committee.

The Loretta Lynch confirmation to be the new Attorney General of the United States  has been held hostage to the anti- abortion provision in the Human Trafficking bill which the Democrats strongly oppose. Ms. Lynch’s nomination has been help up for over four months. This is highly unacceptable in that she is the first African American women ever to be nominated for this high office. She is also extremely qualified for the position. We need your help!
Join the outreach by doing one or all of these things:

Loretta Lynch is more than qualified to be our next AG & demonstrates a steadfast commitment to justice.
Today: Call your U.S. Senator – 1-866-338-5720!
Make sure you give them your name and identify yourself as a constituent!
Then tell them: “Please Confirm Loretta Lynch as Attorney General now! And tell them why it is important to you! (see below)

Sample letter:
We encourage you to confirm Ms. Lynch swiftly so that the Department can continue the important work of law enforcement as efficiently and effortlessly as possible. Her experience and understanding of the law will enable her to effectively enforce the rights of all Americans, including people with disabilities.